I was so excited to go back to where I was born. Maybe nervous was a better word, as I was adopted and brought over to the United States when I was 7 months old. Studying in China was going to be a new experience, filled with feelings of being welcomed into the Chinese culture that I had longed to be a part of for the past 19 years!

However, when I arrived in China for my 10 week summer semester, I felt far from welcomed or accepted in the way I expected. I watched Caucasian American and African American students get doted on by our ‘Chinese partners’, who were students we were paired up with at our Chinese university. In public, the locals asked me to take the photos of them with my fellow American students, and wanted to ask REAL American students about life in America!
I felt completely out of the loop, until I realized that this actually was acceptance. I was treated as though I was truly Chinese: no one gave me a second glance, storekeepers wouldn’t look up when I walked in, and people would come up to the street and ask me for directions as if I lived there. That was the first relief; but then I encountered a bigger issue: communication.
I was at the highest Mandarin level of all of the American students because I had been fortunate enough to go to a high school that offered a strong Chinese language program. However, one hour of class, Monday through Friday, can only teach you so much…
Being Asian, many storekeepers and security guards would speak Chinese to me, and then expect me to translate to my American counterparts. At first, it was terrifying. I would be mortified every time I would have to reply in Chinese with “I don’t know” or “I’m sorry, I’m adopted – I’m American.” But I quickly realized that this is why I opted for study abroad in the first place; I wanted to learn the language that was ripped away from me as an infant. In class, I talked a lot because that’s what MSU-James Madison-Social Justice kids do.
It was when other international students invited me out to eat that I would begin to lose confidence.
The first day I entered Chinese language class I met fifteen international students from all over the world (from Spain to Mongolia). I managed to do fine in class, and was thrilled when the international students invited me out to eat with them afterwards. I soon understood that Chinese was the common language used for social interaction on campus. I could recite dialogues out of the textbooks like a pro, but when it came to talking about “What’s life like in America?”, “Does everyone eat fried Snickers?”, or “Tell us about yourself!” I got tongue-tied and stuttered. It was easy for the teachers to understand us – they were used to a variety of international accents. International students were not used to each other’s accents.

The other students had no idea what I was saying, and I was trying my hardest to get my points across in a language I was barely competent in. On the flip side, other international students would speak Chinese with a Korean or Spanish accent; it would take me about thirty seconds to figure out what they had just said in Chinese, and then another thirty to translate it into English.

As my study abroad trip went on, I slowly realized an extremely important culture point: English is actually known worldwide. At my school, teachers taught us it was “普通语” (Pǔtōng yǔ), or the “standard language [of the world]”. I’m a huge proponent of “understand your privilege!” but not once did I ever think that language could be a privilege.

One day, a 6’3” Korean kid named Hemu who intimidated me mightily, walked up and said “Hello, how are you?” in English. Speaking English was banned in the classroom, and I was so startled that I forgot to be nervous and replied, “I’m alright, and why are YOU speaking English?”

One of his friends explained that Hemu was going to move to Canada soon and he wanted to practice his English. Hemu asked me to dinner and said he’d pay; how could I turn down free food and a conversation in a comfortable language?

It turns out that using Chinese to teach English is actually quite difficult. The dinner was great, but consisted mostly of us using Pleco (a widely known Chinese-English dictionary app) and his Korean-Chinese-English dictionary app to learn new words and explain articles of speech (which don’t exist in Chinese). Hemu turned out to be one of the most enthusiastic people I have ever met, as well as caring and funny. As we walked back to my dorm, he asked if I could translate his Korean name into English and I told him sure. I looked down at my screen for a second before smiling: “Harmony. Your name means ‘Harmony’.” I explained that it was considered a feminine name, but I still thought it was a great name for him. Harmony is in Canada now, and we’re still in touch. Sometimes he asks me to help him with his English homework.
Students weren’t the only people I had to speak to in the language I was actually studying. At the cafeteria, all of the workers spoke only Chinese. On the first morning of classes there were only two food stations open at the cafeteria. One looked like you had to tell the man what ingredients you wanted in the breakfast burrito, the other had fresh egg pies sitting out. That meant that we would be able to get served by gesturing, so day one started out great by pointing at what my friends and I thought looked decent. A middle-aged couple was working the station, and they smiled and tried to speak to us; we replied with nods and smiles, and with not a clue to what they were saying.
I went back for breakfast every day after that. Sometimes I went with others, but mostly by myself. I’m an early bird, and the rest of the American students weren’t willing to get up any time before 7:50 AM for our 8:00 AM classes. I was in Harbin for eight weeks, and for seven of those weeks, my only communication with 阿姨 (auntie) and 叔叔 (uncle) were “Two, please” and “Thank you.”
Three days before I left, I wrote them a note.
It was so much easier (and less scary) to write in Chinese and check for mistakes than to speak and be caught off guard when they tried to ask me questions. I wrote a thank you letter, saying that I know I didn’t say much, but I appreciated them a lot and considered them my first friends at my Chinese university. I gave it to them the next morning before leaving for class. When I checked my phone during break, I found that Uncle from the breakfast place had added me on WeChat (a combination of texting and Facebook that is widely used in China). He texted me to come get dinner later, so I did.
Miscommunication struck me down again!
I bought dinner because I thought he said to come visit for dinner, but I later realized that the text had said we’ll make you dinner. And they did. They put the special breakfast mix that was usually in the egg pies (scrambled eggs, leeks, and bok choy) into dumplings, and gave them to me for free. I decided that if they could take the time to make me a special dinner, I could take the time to ask them about their lives, despite the fact I was pretty sure they couldn’t understand me. However, we talked for awhile and I found out how they worked from 6:00 AM to 8:00 PM every single day, and all about their two children who were now adults. I found out how much they loved to cook and how much they loved watching college students grow up and graduate. I found out that they weren’t so different from the adults in my life.
Before I left, I mentioned that the other American students and I would only be in Harbin for a little while longer before we left for Shanghai, and eventually the USA. For the next two days, Auntie and Uncle gave me breakfast for free, and on the day I left they gave me fresh dumplings and two hard boiled eggs to take with me to the airport. I’m still in contact with them; they ask me about America and when I’m going to come back to China…
The language barrier is huge on study abroad trips. It’s scary to speak to a native speaker. Trying to pay for things at the grocery store in China gave me a new perspective on what it must be like for non-native English speakers when they try to navigate America.
Being surrounded by a language that you are not confident in is absolutely terrifying, but if you push yourself through the language barrier, you’ll find that we’re all human. People understand emotion, they understand smiles – and embarrassed laughs. Communication and empathy bypass language and culture and personal histories, because we’re all just trying to fit into a community that is bigger than ourselves.
And it goes far beyond words. 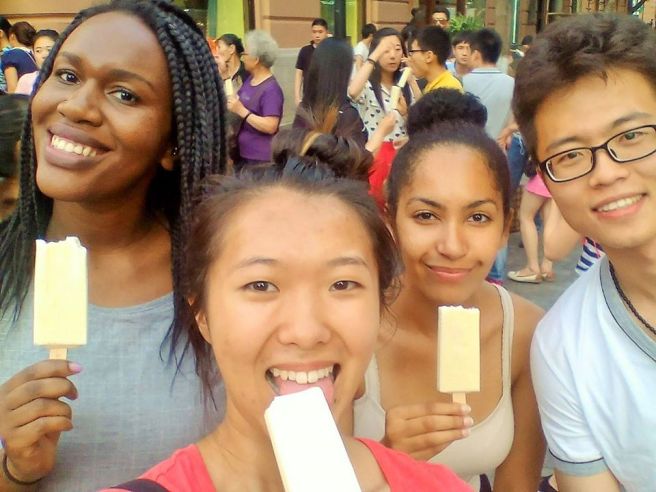 4 thoughts on “Beyond Words: Studying Abroad in a Place That Should Be Called HOME”